Shalom all,
The Hamas “Underground”

According to one of Israel’s major Hebrew dailies, security sources indicate that the goal of Hamas in constructing the mass of tunnels was to carry out a coordinated mega-attack against Israeli civilians on Rosh Hashanah, the Jewish New Year, in September. The plan was to send 200 terrorists through each of the dozens of tunnels at once, to at least six settlements in the western Negev. Some of those tunnels were intended to exit in the middle of those settlements.  Indeed, while not containing railway cars, nevertheless, the system of tunnels could easily be said to be the “Hamas Underground”.

While not all of the tunnels have been disclosed, some had definite goals, while other targets remain undisclosed. Locating the entrance to the tunnels is a gargantuan task, as some are located within residential neighbourhoods inside of Gaza. This photo, declassified by the IDF, shows a tunnel entrance located between a school, a mosque and civilian houses. 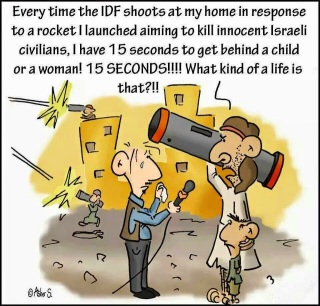 In addition, the media jumped all over the decision this week of the “Human Wrongs Council” of that great un-organization, the United Nations. As many already know, this world body has demonstrated once again its anti-Israel slant and is looking to conduct another investigation of Israel for alleged war crimes. I guess that inasmuch as a “Palestinian” spokesman has already admitted that Hamas is guilty of war crimes, the U.N. doesn’t need to conduct an investigation of Hamas! People in Gaza are given more time to vacate targeted premises than some of the civilians in Israel. If the citizens refuse to listen to the Hamas to remain and be killed, Hamas savagely beats them. Then, Hamas complains of our responses to their attacks upon us. The former Commander of all British forces in Afghanistan has testified before the U.N.  (regarding Operation Cast Lead in 2009) to the fact that the IDF is the most moral military in the world, and continues to say that today. In an interview with one of Israel’s major television stations in mid-week. “No other army in the world has even done more than Israel is doing now to save the lives of innocent civilians in a combat zone…[When a demand is made upon Israel by the world community to do more], perhaps Israel should ask what more it can do.” Despite testimonies in favour of Israel, the U.N. continues to show its prejudice against Israel by requesting yet another investigation. The more things change, the more they remain the same.

These issues and more need to be discussed, as they all are slanted by the main stream media against Israel.
I will end at this point. My oldest son just received notice from one of his classmates in Ben Gurion University of the Negev that her brother was killed in Gaza during the night.
Please pray for wisdom for the leaders of Israel to make the right decisions for the nation.
Pray for wisdom for the leaders of the IDF to be able to plan and put into operation whatever is necessary to get the job done, while minimizing the risk to our soldiers.
Pray for our soldiers, that they would go out in peace and return in peace, not only physically, but emotionally and spiritually as well. Some have seen and experienced events that will remain with them until the end of their days.
Pray for a national spirit of unity, where the people would trust and support the decisions of the government in pursuing what needs to be done in order to remove the tunnel and missile threats from our citizens.
And that brings us to the end of Shabbat.
The LORD is my light and my salvation; Whom shall I fear? The LORD is the defense of my life; Whom shall I dread? When evildoers came upon me to devour my flesh, my adversaries and my enemies, they stumbled and fell. Though a host encamp against me, my heart will not fear; though war arise against me, in spite of this I shall be confident.” (Psalm 27:1-3)
Bless, be blessed and be a blessing.
Marvin