Shalom all,
No agreement is better than a bad agreement.
We have a long-standing policy of not-negotiating with terrorists. Yet, this policy has been broken time and time again. Every release of prisoners in exchange for live Israelis, or for their remains, was through negotiations with terrorists. The Oslo agreements were the result of negotiations with terrorists. The release of Gilad Shalit came about after we came to an agreement with terrorists. Operation Cast Lead came to a halt when we came to a cease-fire agreement with terrorists. It doesn’t matter whether the negotiations were “direct” or “indirect” through intermediaries. The point is that our “policy” is more a paper policy than a policy in practice. The latest evidence of this is the on-again, off-again negotiations in Cairo, which fell apart after Hamas launched 3 rockets into the area of Beer Sheva half a day before the end of the last cease-fire. The “Palestinian” delegation includes representatives from the “Palestinian” Authority, Hamas, Islamic Jihad and their affiliated terrorist cohorts.
On July 28th, P.M. Netanyahu made the following statement at the Defense Ministry in Tel Aviv: “The people of Gaza are not our enemy. Our enemy is Hamas; our enemy are the other terrorist organizations trying to kill our people…The tragedy of Gaza is that it is ruled by Hamas – a tyrannical and fanatical terror group that relishes civilian casualties.”
That being the reality of the situation, “a tyrannical and fanatical terror group”, we should have concentrated our efforts at eliminating this “terror group”, rather than try to negotiate with representatives of the “Palestinians” and try to reach an agreement that was acceptable to terrorists. 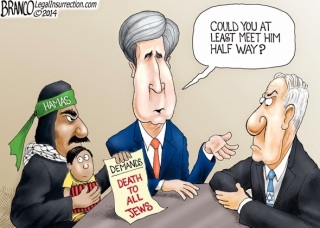 The immediate effect of agreeing to “negotiate” with the “Palestinians”, who needed to get approval from the representatives of the terrorist factions, is that we ended up giving Hamas a status promotion – as a blatant terrorist organization that can determine whether or not there will be war or peace with Israel. The “demands” of Hamas were published over and over again by the MSM, while what was critical for Israel was either downplayed or totally ignored. Even Israel’s demand that Gaza be demilitarized was going to fall by the wayside, as the U.S. pressured Israel to forego that demand.
In the end, after violating 11 cease-fire agreements, Hamas went back to showing the world exactly who and what Hamas really is: an evil, morally-deficient, power-hungry, local branch of the Muslim Brotherhood, whose goal was and remains unchanged, the elimination of Israel. By putting on a suit, the leopard did not change its spots. By learning how to lie without hesitation and how to create fiction for the overly gullible MSM, the scorpion, nevertheless, retains its satanic DNA and is driven to attack and kill, because that is what it does. While we cease, they continue to prepare to fire.
Hamas made its “demands” against Israel. The negotiations in Cairo were intended to address those “demands”, along with some of Israel’s. On paper, Hamas gave the impression that it was pursuing goals for the betterment of the people of Gaza: removal of the naval blockade, opening the border crossings, allowing shipments of goods and supplies to enter Gaza without restriction, receiving enough money to pay the salaries of its workers, an extension of the fishing zone, an international seaport and an international airport, as well as release of security prisoners in Israeli jails, some of whom have blood on their hands. All of this, and more, was included in the “demands” of Hamas, which, if granted, would result in Hamas agreeing to a long-term halt in hostilities against Israel. Somewhere along the line, Israel was willing to agree, in part, to some of those “demands”, which sounded like they were intended to help build an economic infrastructure for the people of Gaza.
But, their arguments are nothing more than the immoral equivalent of the promises of a scorpion not to sting its victim.
Hamas doesn’t care about the people of Gaza. And, it can reasonably be said that it never cared about them. It is true that the people of the Gaza Strip elected Hamas to rule over them, but they did so with an expectation of economic and social improvement. In a sense, there was economic and social gain, but only for the leadership of Hamas, who lined their pockets from the billions of dollars that poured into the Gaza Strip from well-meaning contributors, who never bothered to follow-up where their money went or how their materials, which were intended for humanitarian purposes and economic development, were eventually used.
Israel has been on the receiving end of not only explosive rockets and missiles launched from Gaza, but verbal assaults and media-generated attacks for the actions which it took to defend the country and and its citizenry. The “West” is cowtowing to Islamist agitators, who demonstrate “en masse” and have no hesitation to become violent, if it will help to accomplish their goal of intimidation. The message that they generate is picked up by much of the media, namely, that Israel is to blame for every problem that has beset the people in Gaza.

There was, in fact, an agreement that came out of Cairo. The agreement was that the parties could not agree. It has been rumoured that Qatar threatened Hamas leader Khaled Mashaal with expulsion from Qatar if Hamas gave in to the Egyptian-brokered agreement. Maybe that was what resulted in the decision to resume rocket fire on Israel half a day before the end of the last cease-fire. Maybe not. But, when Hamas resumed firing, all the talking came to an abrupt halt and Israel recalled its negotiators.

The resumption of rocket fire from Gaza into populated civilian communities here drew an immediate, retaliatory response from Israel. Yet, when one major non-Israel news network reported on the event, the headline read: “Israel resumes bombing of Gaza”. No mention of the cease-fire violation by Hamas, no mention of missiles from Gaza targeting civilians. Only Israel was mentioned as being involved in military action.
Israel’s response to renewed rocket fire from Gaza received support from all areas of the political spectrum in Israel, except, of course, from the Arab members of Knesset. And, while even the political left was supportive of our military response to the unceasing terrorist activity, they continued their attack against Netanyahu, saying that he should combine military action with an attempt to reach a political solution with the “Palestinians”. Some people must have been sleeping through their high-school courses on Israeli history and fail to grasp the concept that if we fail to learn the lessons of history, we are bound to repeat them. Some people just never learn.
I recognize that some in the media, or who have access to the media, have opened their ears, their eyes and their mouths in support of Israel. Some were mentioned in the last post. Another one worth listening to, among many others, is Pat Condel.
We can only imagine what would have happened if Israel had agreed to ease both the naval blockade and open border crossings, as it was apparently willing to do by agreement with Washington. By God’s grace and mercy, the negotiations fell apart. Believe it or not, some here are again talking about the possibility of yet another cease fire and of renewed efforts to arrange for renewed negotiations in Cairo. Incredible! Yet, in response to this, khaled Mashaal says that Hamas will not return to negotiations until Israel surrenders to its demands, while accusing Israel of violating the last cease-fire agreement. Hamas lies with impunity, even in the face of facts captured on tape. Despite the lies, the constant accusations against Israel will again be believed by many. We need those who will stand up and speak truth, who will pass on information that the MSM in their areas are not reporting, who desire to be blessed because of their stand in support of Israel (Gen. 12:3). We’re not perfect, but we are trying to survive in an imperfect world and, particularly in an area where our neighbors, those who call themselves “Palestinians”, would be willing to sacrifice their children to achieve the goal of destroying Israel. Here’s 90 seconds that provide a perspective about Hamas that you would not want to miss.
The way to fight against terrorism is to go after it with the intention of defeating it. That is the lesson of history. We cannot allow Hamas to walk away from this war. Such a situation would portray Israel as having “lost” the war against a terrorist group. In this part of the world, such a scenario would encourage terrorist groups to work together towards their common goal of trying to defeat Israel and remove us from the map. We need to eliminate the terrorist leadership. Israel is slowly waking up to this reality and  it is beginning to act as it should. Even Tzippi Livni expressed her support for targeted killing of terrorist leaders. In the meantime, Israel called up another 10,000 reservists. If we go into Gaza again, we shouldn’t leave until Hamas no longer has fangs with which to strike and cause damage or harm.
Preparing to go back to school, children learn how to respond to sirens.
Children all over the world deserve to live in peace. This includes Israeli children. How would you respond if this took place in a kindergarten in your area? Please ignore the introductory segment, which I was unable to delete from the video.
Hamas admits that it kidnapped and murdered the three Israeli teens in June.
Despite repeated declarations of ignorance regarding the kidnapping of the three Israeli students in June, a brief statement of Hamas leader Salach Aruri, which was aired on the official youtube channel of the International Union of Muslim Scholars, admits that Hamas was behind their kidnapping. What he failed to state was that the kidnappers also killed the boys in cold blood, something which made Hamas proud. Indeed, there is no difference between Hamas and ISIS, as Prime Minister Netanyahu said in his press conference last night: “Hamas is like ISIS. ISIS is like Hamas. They’re branches of the same tree. And I can say that the entire world has been shocked by the atrocities of ISIS. You saw this, the beheading of an American journalist, Foley. It shows you the barbarism, the savagery of these people. Well, we face the same savagery. The people who wantonly rocket our cities and want to conduct mass killings, and when they can they murder children, teenagers; they shoot them in the head, throw people from the sixth floor – their own people; and use their people as human shields. Hamas is ISIS; ISIS is Hamas. They’re the enemies of peace; they’re the enemies of Israel; they’re the enemies of all civilized countries.”
Welcome to my world.
“Do not be afraid of them; remember the Lord who is great and awesome, and fight for your brothers, your sons, your daughters, your wives and your houses.” (Nehemiah 4:14)
Bless, be blessed and be a blessing.
Marvin