Of course, it was also a shot in the arm for those who advocate replacement theology, as they had their work done for them by this organization.

The resolution denying proven Biblical history was, as expected, celebrated by the so-called “Palestinians”, who see themselves as protectors of the Temple Mount. A press release issued by Fatah, the ruling party in the area of Judea and Samaria, said that such a resolution would not have been passed if it weren’t for the diplomatic skills of the “Palestinian” President, Mahmoud Abbas and the assistance of Arab nations and other countries. Fatah expressed its thanks to those who “supported the ‘Palestinians'”, while at the same time calling on the half dozen countries who opposed the resolution to “reconsider their positions”. Representatives of the “Palestinians” applauded the resolution as a sign that the international community does not consent to what they refer to as “the occupation of ‘Palestinian’ lands”. It is the same narrative that they push forward at every opportunity. This narrative has been shown to be nothing more than a “political myth” generated by leaders of the Arab community following the Israeli War of Independence. Yet, this “myth” has grown and become like the Emperor’s New Clothes, a claim to existence and history that is not supported by historical fact, but believed on because of political “incorrectness” and expediency, as well fear of reprisal at the gas tanks.
The silence of the countries that abstained is not golden. It was a blatant encouragement to the so-called, self-proclaimed “Palestinians” to continue lying their way into justifying further warfare against Israel and the Jewish people. The longer the lie is set forth and the more individuals and countries are willing to give a listening ear to their made-up narrative, rather than to look at an examine that narrative from an historical and factual background, the more the world will be duped into calling “evil good and good evil, who substitute darkness for light and light for darkness, who substitute bitter for sweet and sweet for bitter” (Isaiah 5:20).
Not everyone, however, buys the lie. Irina Bokova, the Director General of UNESCO, did not agree with the resolution drafted by that organization. She responded to the resolution saying, in part: “To deny, conceal or erase any of the Jewish, Christian or Muslim traditions undermines the integrity of the site, and runs counter to the reasons that justified its inscription on the UNESCO World Heritage list…When these divisions carry over into UNESCO, an organization dedicated to dialogue and peace, they prevent us from carrying out our mission.” 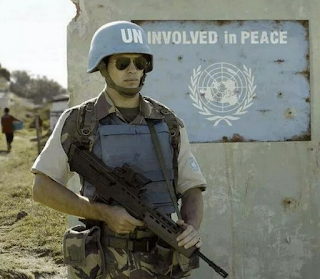 The U.S. State Department condemned it. The American Israel Public Affairs Committee (“AIPAC”) issued a statement calling the resolution “malignant” and saying, in part, that it “undermines efforts to seek a peaceful resolution of the Israeli-‘Palestinian’ conflict by giving support to forces in the ‘Palestinian’ community that reject reconciliation.” As for the UN organization, it not only condemns what it doesn’t understand, but it stands by and misses opportunity after opportunity to promote peace.
Maybe we should be thankful that some nations effectively abandoned their support of the “Palestinians”, by switching their vote in favor to an abstention. From that perspective, it is clear that a non-vote is a “no” vote. Some might even argue that although the “Palestinians” claim that the resolution was a victory, in reality, they lost ground because of the unwillingness of almost half of the nations in UNESCO to side with them. Whatever the win-loss reality may be in today’s world of cowardice in the face of political incorrectness, the reality is that the last chapter of The Book needs to be played out and it will be, in due course.
There is much more that can be said about Jerusalem and the Temple Mount, but the final word belongs to God:
Now it will come about that in the last days the mountain of the house of the LORD Will be established as the chief of the mountains, and will be raise above the hills; and all the nations will stream to it. And many peoples will come and say, “Come, let us go up to the mountain of the LORD, to the house of the God of Jacob, that He may teach us concerning His ways and that we may walk in His paths.” For the law will go forth from Zion and the word of the LORD from Jerusalem. And He will judge between the nations, and will render decisions for many peoples; and they will hammer their swords into plowshares and their spears into pruning hooks. Nation will not lift up sword against nation and never again will they learn war. (Isaiah 2:2-4)
Last night began the holiday of Succot, the Feast of Tabernacles (Lev. 23:33 to end). It is a time of rejoicing. May your remembrance of the reason for it and your anticipation of its prophetic fulfillment encourage you and fill you with joy from the depths of your hearts.
Bless, be blessed and be a blessing. Have a great week.
Marvin