It’s been a while since I’ve written. The intention does not always line up with the time availability. As the Scottish poet Robert Burns once wrote in 1786: “The best laid schemes o’ mice an’ men / Gang aft a-gley.” No, things don’t always work out the way we plan. Well, the summer is fading and challenges both old and new face our country.

Much of the last few months have focused on politics: Israelis will be going to the  polls on 17 September, for an unprecedented national election for the second time in one year. For many reasons, this could be one of the most significant elections for this young country since the early 1980s, when Menachem Begin was elected. We are reminded daily by the media of how many days remain until the election and what the pollsters are saying. The country appears to be as divided as it was before the earlier election, but is leaning towards another victory for the Likud party (headed up by Prime Minister Benjamin Netanyahu). However, even if we work on the presumption that Netanyahu’s party will succeed to get the most votes, they will be far short from what is necessary to form a new government. For this, he will need the assistance of other parties, all from the political right, to form a right-wing coalition government. This will be a replay of what occurred following the last elections, only with the players slight re-aligned. Still, if all of the political parties (and their leaders) that were potential coalition partners in the last election remain in the picture after the next election, the problems that prevented the formation of the government earlier in the year will still exist. The big question is how many seats the “right” will get, again presuming a Netanyahu victory. It needs to be at least 61 to be given the nod to form a new government and probably closer to 70 in order to overcome the issues that prevented the formation of a coalition government the first time around and delay potential prosecution on various criminal charges that loom large in the question. It’s been said that politics makes for strange bedfellows. We’re beginning to see some of that take place. More on these issues to follow.

As has been widely reported in world-wide media, about two weeks ago, Israel refused to allow entry to the country of two US Congresswomen – Rashida Tlaib from Michigan, and Ilhan Omar from Minnesota. They were not an official, government-sponsored delegation, but were on a personal mission to condemn Israel and further BDS efforts to promote Israel’s destruction. Ironically, Israel’s democracy allows its elected members to the Knesset to speak against it and even call for its termination. Would the U.S. allow members of its Congress to call for the destruction of America? Such efforts would be immediately condemned on both sides of the Congressional isle, accompanied by calls for removal of those “representatives”.

In this particular situation, “the Squad”, as these two women, along with two others, have come to be known, have made it their mission and goal to challenge Israel’s right to exist, something they would not even try to do regarding the United States. They seek to be playing both sides against the middle – advocating the demise of an American ally, while giving the appearance of doing so as a patriotic endeavor.

Israel was in a no-win situation regarding the Tlaib and Omar fiasco. Are we as a country strong enough to absorb their baseless, un-factual diatribes? Of course, we are. Should we have allowed them to come in after all? The jury is still out on that one and opinions here and in the U.S. are divided. Still, it is the right of every sovereign nation to determine who will be allowed to enter its borders and it is within the proper exercise of

that country’s discretion to determine whether that person is friend or foe. In this case, the determination is clear. The purpose of their trip was to meet with Israel’s enemies and not with any officials of the Israeli government. Tlaib’s protestations that Israel prevented her from seeing her grandmother was nothing but another fiction, whose bubble was popped when she was offered that opportunity by the Israeli government, but decided not to accept it.

Israel took a firm stand to refuse to allow supporters of the BDS movement to spew their antisemitism and hostile, false accusations against Israel and to do so on Israeli soil. Some viewed our decision as being undemocratic and a slap in the face to the U.S. government. Fear should not be the basis of our national policies. We did what was right, even if it ruffled the feathers of politicos on both sides of the Big Muddy. The split that was created in US-Israel relations as a result of refusing entry to Tlaib and Omar is not as critical as some would try to argue. Our relationship is based on years of cooperation and understanding. We’ve weathered other storms, particularly during the Obama years, and this one will pass as well. As we say here: “We got over Pharaoh, we’ll get over this!”

On the northern front

Tensions continue to build along our norther border with Lebanon. following Israel’s attack on the outskirts of Damascus at the beginning of this week, preventing an armed drone attack from there to points in Israel. Between Saturday and Sunday of last weekend, there were two military actions: one against the Iranian Revolutionary Guards cell on the outskirts of Damascus and the other, inside Lebanon. Hassan Nasrallah, the head of the terrorist organization, Hezbollah, tried to downplay the events, particularly the successful attack on Hezbollah fighters in Lebanon and focused more on the events in Syria, while threatening retaliation. As a result of last weekend’s activities, the IDF revealed considerable details about the Hezbollah’s project to produce precision missiles, with the assistance of Iran. 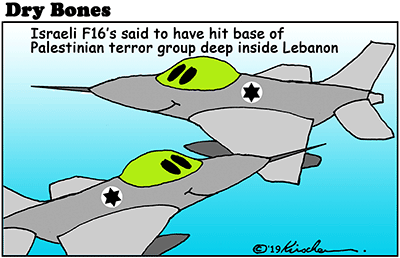 In a speech by Nasrallah today, he indicated that a response from the Hezbollah can come from anywhere in Lebanon. He asserted that even though the Hezbollah does not have a factory for the production of precision weapons, the organization has enough of them for any confrontation.

As mentioned in prior posts, the next war will be a mess, with a potential for a multi-front war that includes Lebanon and Syria in the north, now possibly joined by Iraq, and Hamas from the Gaza Strip. The IDF has responded to the threats from Nasrallah, saying that it is prepared for any scenario. In the meantime, the IDF closed off the air space over the Golan Heights, which, apparently, will remain closed at least for the next week. It has also moved tanks and artillery to points north. This is a time for cool heads to make decisions here. A small spark can create a major conflagration.

“I will defend this city and save it, for my sake and for the sake of David my servant!” (Isaiah 38:5)

“Yet their Redeemer is strong; the LORD Almighty is his name. He will vigorously defend their cause so that he may bring rest to their land, but unrest to those who live in Babylon.” (Jeremiah 50:34)

Bless, be blessed and be a blessing.

Have a good week.

One thought on “Multi-Front Rumblings”