HAPPY BIRTHDAY, ISRAEL! You are the oldest youngster among the nations. It is celebration time, but so incredibly different from all the birthday celebrations that have taken place since you returned to your ancestral homeland, after two thousand years of dispersion in the diaspora.

The sky was blue this morning with white clouds interspersed, very symbolic of our national colors. We are a sovereign nation, whose inhabitants live in a free and democratic society. We don’t always agree on things that occur here or on how things are done, but we have the right and the freedom to express our differences, to be heard and to make a difference. Our freedom and the restoration of our national identity came at a price, a price that we continue to pay year after year.

The day immediately preceding Israel’s Independence Day is a Memorial Day set aside to commemorate Israel’s fallen – those who were killed in the defense of the country, as well as those who died as a result of terrorist activity. Since the founding of the modern State of Israel in 1948, we fought six wars, dealt with two full-blown and extended intifadas and a multitude of terrorist attacks. From the date of our establishment, we have not had a single decade without a war. Yesterday, we honored 23,816 fallen soldiers and over 3,100 people killed in acts of terror.

There is hardly a family in Israel today who does not personally know someone, or who does not know a family or neighbor or co-worker of someone, who was killed or injured in a war or as the result of a terrorist incident. It is a small country and every loss is treated as a family loss. I’ve attended funerals of people I knew personally, as well as funerals of people whom I didn’t know, such as the young lone soldier (who had no family in Israel), who was killed in 2014 during Operation Protective Edge. I still remember with vividness the throngs that turned out to honor someone who gave his life for this country. Year after year, we become riveted to the stories, the videos, the documentaries of the fallen, which are broadcast, so that all can see, so that all can remember. Everyone is referred to by name, often accompanied by photos from the time of birth, through school, to enlistment in the IDF, to the time and circumstances of their death. Even the most hardened, combat veterans cannot hold back tears, when they speak of their comrades, many of whom put themselves in harm’s way to protect others in their units. Truly, these stories never fail to pull tears from eyes that were dry, like a faucet that cannot be closed. Despite our many differences, we are truly a nation that unites in our losses, that mourns with those who mourn, that makes every effort to comfort those who are bereaved of  spouse, parent, child, brother or sister.

This year, more than at any time before, when travel restrictions and lockdowns because of the Coronavirus pandemic keep us at home, we become, in a practical sense, a captive audience, sharing collective pain and suffering, as we remember not only the fallen, but the nation that they died for.

This year, however, military cemeteries were closed to the public, as part of the ongoing efforts to minimize the health risks that would accompany the usual multitude of visitors to those cemeteries. Still, notwithstanding the government restrictions, there were a fair number of instances where family members went to the military cemeteries, only to be reminded by police units that they were in violation of the restrictions imposed on the country. Notwithstanding the blatant violation of “stay-at-home” regulations, the Israeli Police were instructed not to prevent immediate family members from visiting the graves of their loved ones, provided that they wore protective facial masks and kept a distance of two-meters between them. There was an unstated, but widespread, recognition of the importance of such visits by family members, particularly after a prolonged lockdown, the likes of which the nation has never experienced.

At then, with the going down of the sun and the beginning of the new day according to the Hebrew calendar, the nation began its celebration of our seventy-second year of national independence. If ever the country needed a break from the prolonged lockdown and restrictions on movement and contact, Independence Day was the ideal day for it to take place.

But, the yearly celebrations that normally take place throughout the country were cancelled. A portion of the special, Independence Day ceremony that takes place on Mount Herzl in Jerusalem was pre-recorded, while other aspects of it were broadcast live, such as the lighting of twelve celebration torches, symbolic of the nation’s origins from the twelve tribes of Israel.

The official opening of the ceremony, with speeches by Prime Minister Benjamin Netanyahu and by Benny Gantz, who signed a unity government agreement with Netanyahu last week, were both pre-recorded and shown in video messages. Despite the words of encouragement by both of them, the fact remained that the feelings of celebration were somewhat muted, due to the lockdown and travel restrictions, which will remain in effect until the end of Independence Day.

With the elections behind him and the challenges of a national unity government in front of him, Benny Gantz spoke as a former IDF General, who was prepared to work with Netanyahu to guide the country to overcome the challenges and to press forward to “form a new ethos, a story of solidarity”: “We are going through difficult times, and we must prepare for even harder times. We will win this war, and form a new ethos, a story of solidarity; a story that would not be defined by strangers or enemies, but by ourselves. This should be our main mission in the national leadership.”

His speech also included reference to the fallen soldiers, whose memories were the focus of the day that had just concluded: “Nothing separates them – not where they were born, not their sexual identity and not their political stance. Under the deafening silence of death, they are all equal here. We have the responsibility to ensure we are all equal in life, too.”

There is an indomitable spirit among the people of Israel. The pandemic that has paralyzed most of the world for a season, has affected Israel as well. No enemy, national or microscopic, will succeed in diminishing that spirit. On the contrary, they spur us on to overcome the challenges and to press on to accomplishments even greater than what we were able to do until now. It is in a very real sense “built in” as part and parcel of our national being. It is “who we are and how we respond to challenges”.

In the midst of travel restrictions and social distancing, communities join together and sing on our balconies. Modern technologies, such as Zoom, allow multitudes to encourage multitudes of others. Physicians use the media to diagnose and provide needed treatment to multitudes of senior citizens, who are unable to leave their apartments. Young people have volunteered during this recent health crisis to deliver food packages, medical supplies and other necessary items to people all over the country. People knock on the doors of their senior-citizen neighbors, to inquire if they are well and if they need anything. Telecommunications flourish, teaching “online” came into its own, multi-person “online” meetings may well re-arrange our schedules, without having to face traffic jams, and there is a major push to develop vaccines and medications to deal with Covid-19, as well as a wide variety of other illnesses. In the midst of difficulties, we look for ways that our lives would be improved when the difficulties are over.

We are three thousand five hundred years old and, by God’s grace, we still yield fruit despite our age. (Psalm 92:14). We have learned a few things during that time that enable us to live amid difficulties and enjoy being seventy-two years young. Some of them are “to sing for joy to the LORD [to] shout joyfully to the rock of our salvation” (Psalm 91:1), “for the joy of the LORD is [our] strength” (Nehemiah 8:10) and a “joyful heart is good medicine” (Proverbs 15;13 – loose translation), particularly when facing the microscopic giant. 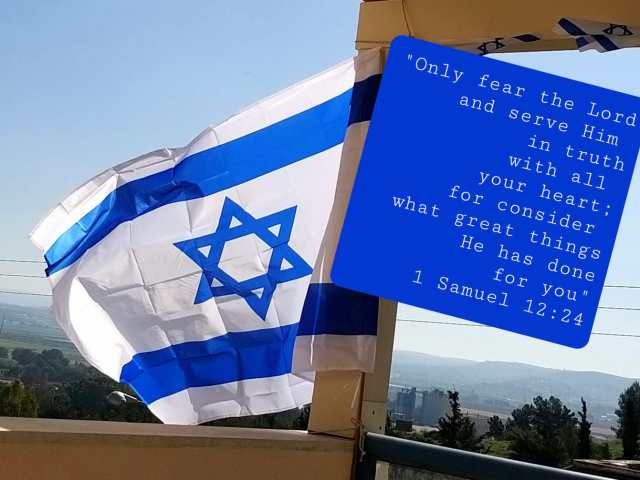 Bless, be blessed and be a blessing,